Cooking Meat in the Backcountry: The Original Stoneware

It’s a fair bet that most of us have roasted chunks of our most recent harvest on a spit over... 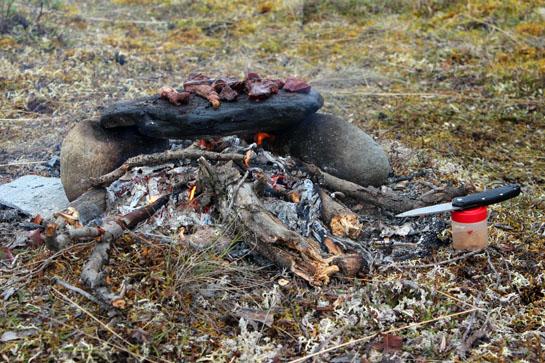 It’s a fair bet that most of us have roasted chunks of our most recent harvest on a spit over a fire, but here’s something my friends and I have figured out that works like a charm, especially when there isn’t much wood for a fire, much less a spit.

This is an incredibly simple and effective method, and one we use all the time when sheep hunting. First, gather enough wood or dried brush for a somewhat sustainable fire. I usually get two big, flat-sided rocks of about the same thickness, and a large, flat rock that is fairly thin. Next I’ll get a fire going, and put the two flat rocks on either side in a V shape, with the open end pointed upwind. Then, I put the flat rock across the top of the other two to serve as a frying pan. As you feed the fire from the upwind side, coals and heat are funneled under the cooking rock. Be careful, though, as cold or wet rocks can and will explode when they heat up.

Once the flat rock is hot, cut a few pieces of fat and throw them on. The fat will melt, giving you a nice slick of grease to fry on. Cut your meat in fairly thin pieces, and they will cook quickly. There are a couple big advantages to this method. For one, the meat doesn’t dry out like it tends to do over an open fire, getting scorched on the outside and remaining raw on the inside. It’s just like pan cooking a steak, the meat will cook in its own juices. Second, it’s a very clean cooking method, and you won’t have to worry about scrubbing your pan afterwards. Sheep meat, especially, leaves a grease on the pan that is very frustrating to try and clean, and still manages to get on everything.

Next time you’re in the backcountry and want to cook up some of your hard earned backstrap, give this cooking method a try. You might not use a spit or a pan ever again.