Good on this dad 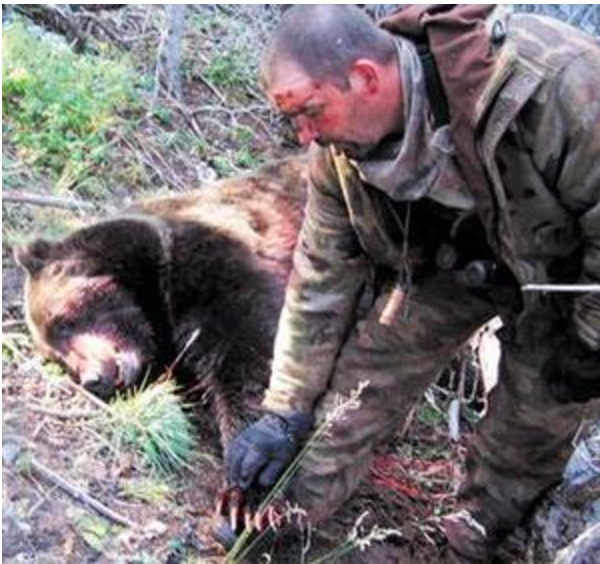 Quick thinking, good bow shooting and a prayer combined to help Cody, Wyo. bowhunter Ron G. Leming, 62, loose a single arrow from his compound bow and subdue a grizzly bear that was attacking his son, Ron J. Leming, 37, while the two were elk hunting in northwestern Wyoming on September 12.

In a detailed article, the Cody Enterprise reports this week that the father and son were on their annual bowhunting and horse-packing trek into the backcountry when the grizzly—an 11-year-old male—emerged from the woods and charged the younger Leming. On impulse, the hunter jumped behind a nearby tree and began dodging the attacking bruin. Then he began to run downhill, hoping to escape and figuring he could move faster in that direction.

“I passed my dad and I saw an arrow fly right by my leg, about two feet away,” Leming told the Cody newspaper. He realized his father had taken a shot at the moving bear, but was unsure if the arrow had met its mark.

Leming was able to free himself after applying several kicks to the bear and then tried to jump through a tree fork, but the relentless bruin attacked him from behind, biting his back. Unable to see his son beneath the animal, the elder Leming used his bow to repeatedly strike the attacker.

Suddenly, the bear ended its attack and began to move away from its victim.

“He took a few steps toward Dad, then he started walking down the hill. I told Dad to kill him, but (the bear) was already starting to check out,” Leming said.

The fatally hit bear stumbled back and fell over a log, dead— after traveling about 80 yards. As it turned out, the elder Leming’s single shot at the running grizzly had severed a major artery and sliced into its heart.

“I would have been mauled way worse, if not killed, if Dad hadn’t had the nerve to stand his ground and shoot that bear with his bow,” the attack victim later told the newspaper. “There’s not many people who could have done that.”

After packing out of the wilderness with their horses and gear, the attack victim was taken to a local hospital, where he was treated for numerous puncture wounds and scratches. He was released the following day.

A spokesman for the Wyoming Game and Fish Department said the incident remains under investigation, though the shooting appears to be a clear case of justifiable self-defense.

And what about the elder Leming’s incredible shot at the speeding grizzly as it chased his son downhill?

After missing two shots a bull elk with his bow the day before the attack, the senior Leming apparently asked for some Divine shooting intervention, according to his grateful son.

“The night before, Dad said a prayer for God to guide his arrow,” he explained.