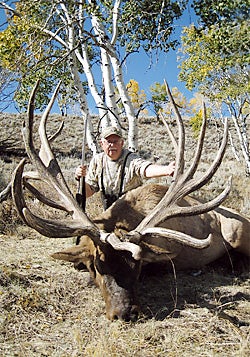 Last week, a Boone & Crockett Club scoring panel confirmed that the massive non-typical bull elk taken on Monroe Mountain in central Utah by hunter Denny Austad in September 2008 as the official the new World Record for the category and species.

The panel determined the “spider bull,” (a nickname bestowed upon the animal because of the tangle of antlers it carried), scored 478 5/8 non-typical, 93 inches above the B&C minimum score for non-typical American elk and more than 13 inches larger than the previous World Record.

Tracking official scoring data dating back to 1830, the bull’s gross score of 499 3/8 inches makes it the only elk in history that has ever come close to reaching the hallowed 500-inch mark.

But the massive bull, the hunt, and the B&C World Record title itself continue to be the subject of a heated debate within the hunting community.

That’s because Austad was hunting with a Utah Governor’s Tag he purchased at auction for nearly $170,000, which allowed him to hunt elk in any unit in the state, using his method of choice, and up to two months, if necessary. Many states have similar tag auctions that have raised millions of dollars for noteworthy and beneficial wildlife and habitat programs.

Austad tagged the bull after hunting for 13 days, on land open to hunting, while adhering to the Boone & Crockett rules of Fair Chase.

But many, including Outdoor Life’s Hunting Editor, Andrew McKean, point to several aspects of the story and hunt that explain why some hunters are concerned that the bull–and its World Record status–may signal a disturbing trend.

“Does Austad’s achievement merit the same recognition as a hunter who competed against the masses to harvest an animal?” McKean asked in an Editorial Opinion last year. “Austad hunted with a modern rifle in an area that was open only to muzzleloading hunting at the time for most permit holders. In essence, he bought the chance to participate in a special hunting season.”

McKean further opined: “For hunters who are passionate about America’s tradition of free, public hunting and fret the implications of trophy hunting at any cost, the Spider Bull represents a troubling trend.”

The Boone and Crockett Club, Pope and Young, Safari Club International and other hunter-membership organizations that measure and document outstanding big game animals often publicly state that their record-book listings are meant to honor the game animal first, with the recognition of the hunter being secondary.

Above all, that’s where all hunters should focus while admiring this amazing natural wonder that once resided on Utah’s Monroe Mountain.–J.R. Absher