A sharp-eyed California fisheries researcher perusing the Internet recently was shocked after he recognized an endangered and highly protected salmon... 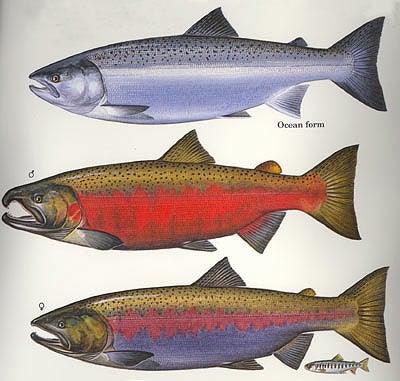 The coho salmon is a species that has been severely impacted in certain regions of the West in recent years, and its annual return to some California rivers for spawning has fallen to dramatically low levels. In fact, on the Russian River, once considered a prime coho fishery, only two fish were documented by biologists during last year’s spawn.

It is a species strictly protected and considered endangered by both the federal and state governments.

That’s why a photo spotted by UC Davis Extension researcher Joe Pecharich on the Internet proved particularly troubling to him. There, pictured on the Web site of a Guerneville, Calif. tackle shop’s fishing contest, was an angler with a large salmon–and it was definitely a coho.

“When I first saw the picture, I was scrolling the Web site and said ‘Oh no! That’s a coho!'” said Pecharich.

The Santa Rosa Press Democrat newspaper reported that Nick Wheeler, manager of King’s Sport and Tackle, admitted it was all a huge mistake.

“The coho are hard to distinguish between the steelhead and chinook, and we have not had coho runs,” said Wheeler. “I haven’t seen a coho, other than that one.”

The name of the angler who caught and entered the fish was not made public. An endangered species act violation is punishable by fines up to $1,000 and six months in jail. The infraction is currently under investigation.

Particularly troubling to Pecharich and others involved in the coho restoration effort was the fact that the fish in question was a female, and could have potentially spawned and laid about 3,000 eggs.

The Press Democrat story notes that the state of California distributes fliers to fishing shops that explain the differences between the coho and other salmon species.

“The solution is to have good angler education so people who do go out to fish really know the difference, so if they accidentally hook the coho they can put it back in the water unharmed, with as little damage as possible,” said Manfred Kittel, who heads the state coho recovery program.