What Were They Thinking?

Here’s more proof (as if you need any) that wildlife poachers aren’t the brightest bulbs in the socket. For a... 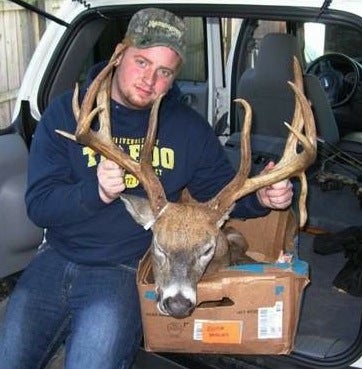 Here’s more proof (as if you need any) that wildlife poachers aren’t the brightest bulbs in the socket.

For a pair of University of Toledo students, it wasn’t enough to illegally kill a deer in a city park at night during the first week of October. No, they decided to show off the big buck, driving it around and taking it to a nearby sporting goods mega-store, where it was viewed by multiple witnesses.

Later, they began posting photos of 15-point whitetail on various Internet hunting sites, claiming it was killed by one of the young men hunting with a longbow.

The kicker: It was even posted on the Ohio Division of Wildlife Website featuring trophy deer taken by hunters in The Buckeye State.

The two ne’er-do-wells just might have gotten away with their wildlife crime if it weren’t for a few details they overlooked.

For starters, the mega-buck from Side Cut Metro Park was a favorite among park users, as well as among local photographers. Its distinctive rack featured a large drop tine with a peculiar shape.

The local fans of the massive buck who called him “Big Boy” and “Sticker” immediately realized when he was missing from the park.

So when photos of one of the men posed with the deer began circulating, it was just a matter of time until someone recognized the big bruiser and matched up some of the many photos taken of him over the years.

As a result, the tips to Ohio’s Turn in a Poacher hotline started coming in like gangbusters.

Justin Angles, 20, of Fostoria, and Dave Mahoney, 20, of Akron were subsequently convicted of multiple charges, including taking a deer by illegal means and illegal possession of deer parts.

Last week during their sentencing hearing they were ordered to pay a total of $13,278.60 in fines and restitution–the largest amount ever imposed in an Ohio poaching case.

Both young men were also ordered to serve 60 hours of community service and had their hunting privileges suspended for three years.

The fines were calculated using a new restitution formula for exceptional trophy-class deer that became law in Ohio last year. This case marked the second time the new formula–based on the Boone and Crockett scoring system–was used in a poaching case.