Based on new scientific data indicating that nearly three times the number of black bears live in the state than... 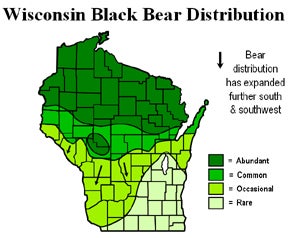 Based on new scientific data indicating that nearly three times the number of black bears live in the state than previously estimated, the Wisconsin Natural Resources Board voted unanimously last week to increase the bear kill quota by 55 percent

As a result, for the 2009 Wisconsin bear-hunting season, the quota will be raised to 4,585 and the number of hunting permits raised to 7,310, a 57 percent increase.

As recently as 2007 the Wisconsin DNR estimated that there were 13,000 black bears in the state, but a comprehensive research study completed by the University of Wisconsin-Madison in 2008 revealed a bear count closer to 37,000.

Last week’s DNR staff recommendation was praised by representatives of the Wisconsin Conservation Congress Bear Committee, the Wisconsin Bear Hunters Association and the Wisconsin Wildlife Federation prior to the board’s vote.

In the past, the DNR monitored the bear population by using the age of bears that are killed, permit success rates, agricultural and nuisance complaints, and visitations at bear bait stations.

The study by University of Wisconsin graduate student Dave MacFarland with guidance from Timothy van Deelen, Ph.D., was more detailed.

“We believed there were more bears than we were being told. We were skeptical about the DNR doing anything about it,” said Bob Welch, representing the Bear Hunters Association. “We are very happy about the way this came out, and very pleased how the department adopted the study.”