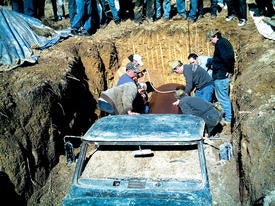 Adam Dancy says it’s how his dad wanted it.

Adam’s father, Albert Dancy, 50, was shot and killed Feb. 15, in what authorities say began as a domestic dispute involving his ex-wife and Robert Dodrill, Jr. According to The Charleston Daily Mail, Dodrill, 44, has been charged with first-degree murder and burglary for allegedly forcing his way into Darcy’s Summersville, W.Va. mobile home and shooting him in the chest with a small caliber handgun.

While he was alive, Dancy, a carpenter, coal miner, avid hunter and angler, always told his son that when his time on Earth was done, he wanted to be buried in his 1967 turquoise-colored Chevy pick-up truck.

“He said it always joking around, but he said it for so many years it was pretty much serious to me,” Adam, 24, told the Charleston paper. “I always took him seriously. It was the last thing I could do for him.”

So last week, on a private plot located on Adam Dancy’s Clay County place that once belonged to his father, Albert was laid to rest, in a coffin carried in the truck’s bed.

Inside the casket, the elder Dancy was dressed in his camouflaged hunting clothes. His favorite Old Timer folding knife was in his pocket and the .243 Remington that he used to kill a nice 10-point buck the year before last was at his side.

In accordance with environmental regulations, the truck’s tires were removed and all fluids were drained before it was placed in the ground.

The junior Dancy told the Charleston paper there was no deep symbolic meaning to the interment, like burying his father with things he might find useful in the hereafter.