Can You Hear Me Now?

British businessman Andrew Cheatle thought his cellphone was gone for good after he dropped it while walking his dog on... 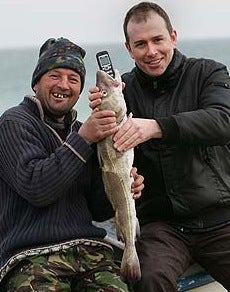 British businessman Andrew Cheatle thought his cellphone was gone for good after he dropped it while walking his dog on the beach.

“I was messing about with my dog and my phone must have fallen out and been swept out in the swell,” he told The UK;s Sun newspaper. “I kept calling it but I gave up hope after a couple of days.”

A week after the incident, when his girlfriend received a call originating from Cheatle’s lost phone, she wasn’t sure what to expect when she answered it.

It was trawler fisherman Glen Kerley, who said he discovered the Nokia 1660 phone inside a 25-pound cod he’d netted. He and Cheatle made arrangements to meet.

“I didn’t believe him but went to meet him and found it was my phone–a bit smelly and battered–but incredibly it still worked after I let it dry out,” said Cheatle.