From the Canadian Press…(You can’t make this stuff up)… SARNIA, Ont. – A cardboard cutout of a coyote designed to... 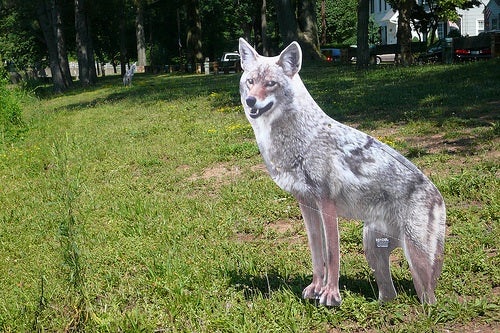 From the Canadian Press…(You can’t make this stuff up)…

SARNIA, Ont. – A cardboard cutout of a coyote designed to scare off Canada geese in a southern Ontario park proved so realistic it prompted an attempted police takedown.

Sarnia city hall staff purchased a pair of the animal cutouts hoping they might help reduce goose droppings in the waterfront park and set them up last summer.

But after a few weeks the cutouts vanished.

‘You can’t put up any really fancy signs in the park because they usually disappear.’

But the full story has only now emerged.

A jogger out for a run early one morning came across the coyote cutouts and was so startled she ran to a nearby construction site.

There, she told a worker a coyote had ‘barked’ at her and that she feared it would give chase, McCallum said.

The worker called 911 and Sarnia police were dispatched.

They arrived on the scene and quickly surrounded the coyote, only then discovering it was made of cardboard.

The police, smelling an elaborate prank, confiscated the cutouts.