No one seems to know exactly what force–or combination of forces–caused dozens of Canada geese to fall from the sky... 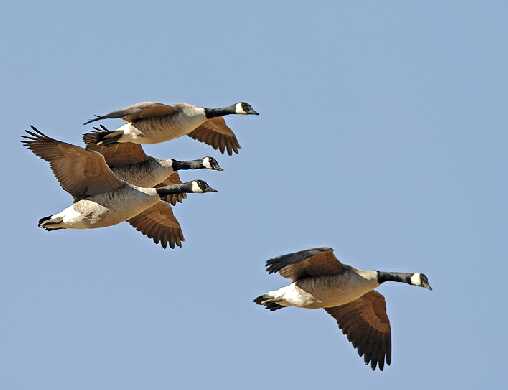 No one seems to know exactly what force–or combination of forces–caused dozens of Canada geese to fall from the sky during a severe thunderstorm in central Pennsylvania.

Under the circumstances, most folks initially speculated that lightning killed an estimated 56 wild geese found on a highway near State College, Pa. following a severe thunderstorm on Feb. 27.

Pennsylvania State Police Trooper Charles Wilt came upon the scene near the Bald Eagle exit of Interstate 99 in Blair County just moments after it occurred.

“A couple of birds appeared to have been run over by cars after they fell, but most of them didn’t show any outward damage,” Trooper Wilt told the Centre Daily Times. “I thought that maybe they had been struck by lightning.”

Trooper Wilt said all the geese he observed were dead.

However, on further examination, none of the nine geese tested the Animal Diagnostic Laboratory at Penn State University showed signs of lightning strikes.

“A necropsy was performed at PSU on the geese, and they all had crushed breastbones and trachea, with no sign of electrocution,” said Terry Clevenger, dispatcher in the Southcentral Office of the Pennsylvania Game Commission.

“Although they are continuing the investigation, the most likely explanation is that they were thrown to the ground by a severe downdraft during the storm.”

Game Commission veterinarian Dr. Walter Cottrell agreed with the assessment of damage, but hedged on the possible cause.

“The geese all had quite severe trauma to their undersides, including massive bruising and crushed breastbones,” Cottrell said. “It is no doubt that they died from hitting the pavement or ground, and the force involved was more than just a bad landing.”

Bad landing? That brings up yet another possible explanation that no one has mentioned.

Insufficient de-icer on their wings.