If there was ever any question about wolves being ruthless and indiscriminate killers, this week’s story out of Eastern Oregon... 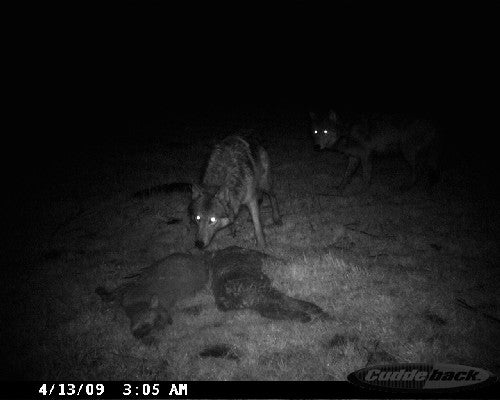 If there was ever any question about wolves being ruthless and indiscriminate killers, this week’s story out of Eastern Oregon will dispel any doubt you may have.

The U.S. Fish and Wildlife Service and Oregon Department of Fish and Wildlife have confirmed that wolves were responsible for killing nearly two dozen lambs on Curt Jacobs’ Baker City, Ore.-area ranch in separate attacks in recent weeks. The attacks were the first documented losses of livestock to wolves since the predators returned to the state in 1999.

After the first attack on April 9, four digital trail cameras placed on fenceposts by ODFW wolf coordinator Russ Morgan captured the images of two wolves when they returned April 12 or 13 for more lamb-killing.

As further evidence of the specie’s cold-blooded nature, only a few of the lambs had been fed upon. In addition to the 23 lambs that were killed, several others were seriously wounded and may have to be euthanized.

Unlike in neighboring states where the reintroduced predator has a large, sustained population like Idaho and Montana, wolves remain protected as state endangered species in Oregon. The state’s wolf management plan does not allow ranchers to shoot wolves, even if they catch them killing livestock.

Though the gray wolf is scheduled to be removed from the federal endangered species list on May 5, the policy in Oregon would remain unchanged–a fact that has revived contentious debate over whether ranchers should be allowed to shoot wolves on sight.

“It’s all right to have the animal be here,” rancher Jacobs said in a newspaper report of the sheep killings. “But if every time you went to work in the morning, somebody stopped you and took your lunch pail and you couldn’t say nothing about it, it would get old after awhile.”