You might say that Bruce and Rene Thompson’s marriage started off with a bang. And no, it wasn’t what you’d... 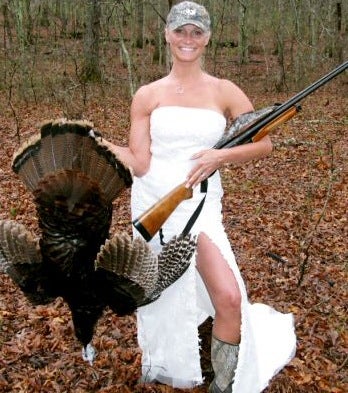 You might say that Bruce and Rene Thompson’s marriage started off with a bang.

And no, it wasn’t what you’d call a “shotgun wedding.” But that said, a 12-gauge did play a major part in the couple’s honeymoon.

The newlyweds, who hail from Louisville, Tenn., tied the knot in Jamaica, but flew back to the states to spend their honeymoon turkey hunting in east Tennessee.

Outdoors scribe Bob Hodge, writes in the Knoxville News-Sentinel that when the couple’s plane landed at the Atlanta airport, their car was already loaded with their guns, calls and camo gear–and they drove directly to AEDC Wildlife Management Area (near Chattanooga, Tenn.).

Once there, they slept in the car, then at daylight on opening day started hunting.

It wasn’t long before Bruce got a turkey to gobble, Hodge wrote. They put a decoy out and about 10 minutes after that Rene had a 17-pound jake with a 4-inch beard on the ground.

“Bruce would call and it would gobble and to be able to experience that was great,” she said. “Bruce was telling me to move a little this way and stuff and then I saw it coming in.”

Just in case you’re wondering, Rene put on her wedding gown after she killed the gobbler, just to pose for photos. It was part of the pact the two lovebirds made prior to the hunt.