Considering the economic turmoil faced by many newspapers these days, I guess we shouldn’t expect newspaper reporters and their editors... 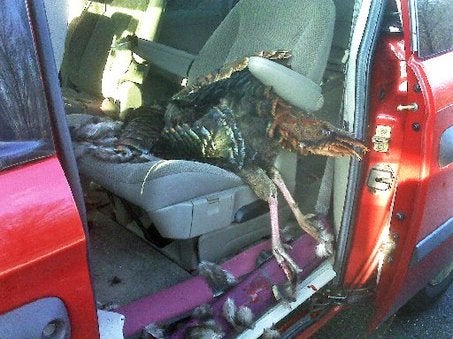 Considering the economic turmoil faced by many newspapers these days, I guess we shouldn’t expect newspaper reporters and their editors in urban parts of New Jersey to be expert ornithologists when it comes to bird identification.

That’s asking way too much.

But you’d think that maybe, just maybe, someone covering the story that appeared in several New Jersey and New York news sources during the weekend would have looked at the photograph accompanying their reports and recognized that the big bird that crashed through the window of a minivan on Route 80 in Parsippany one morning last week was not a turkey vulture–it was a wild turkey.

Jorge Hurtado and his wife were engaged in their morning commute when the big fowl crashed through their windshield, showering Mrs. Hurtado with glass as it hurtled past her, landing in the back seat, where it soon succumbed to its injuries.

Papers including the Morris County Daily Record, Newark Star Ledger, Gannett New Jersey and New York’s Newsday all identified the bird as a vulture, as did NJ State Trooper Brian Miller, who investigated the accident.

Just have a look at the photo snapped by Mr. Hurtado at the scene. Ever seen a buzzard with legs (and spurs) like that?