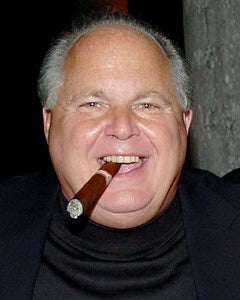 Why is Rush Limbaugh against hunting?

I can accept that Rush Limbaugh isn’t a hunter, but his apparent alliance with the most insidious of anti-hunting groups makes me wonder if he needs to check his prescription medicine.
As one of most influential voices of America’s conservatives, Limbaugh is one of those few people who easily can be identified by just one name. Since President Obama’s election, Rush’s daily radio commentary has become essential fodder for neo-conservatives, for moderate Republicans and for millions of Americans who want to restore some common sense and restraint to the country.

So why is this golden-voiced partisan climbing- no, leaping- in bed with arguably the most dangerous anti-hunting group in the country, the Humane Society of the United States?

Maybe Rush had a particularly good experience with pet adoption and (wrongly) wants to credit the Humane Society for operating a local animal shelter. Or maybe he bought their malarkey about being the voice for helpless animals, including his beloved cat Punkin’. [One radio spot that’s getting plenty of airtime is his fawning description of the Humane Society’s somewhat marginal role in clamping down on dog fighting.](http://www.hsus.org/press_and_publications/press_releases/rush_limbaugh_reco/ rds_audio_041409.html) (For the record, the Humane Society doesn’t have a monopoly on wanting to rid the nation of dog fighting.)

Whatever his motivation, Rush’s embrace of the Humane Society of the United States is shortsighted and dangerous to those of us who love to hunt and fish.

Apparently no one told Rush that the HSUS wants to end hunting in America, aims to give animals the same legal protections afforded to humans and lobbies to end traditional agricultural methods that could ruin rural communities across the world.

The Humane Society has bankrolled every major piece of legislation, lawsuit or ballot issue that would restrict the rights of Americans to hunt. They have tried to ban the hunting of America’s number one game bird, the mourning dove. The Humane Society successfully lobbied for cancellation of New Jersey’s black bear hunt. The group continues its fight against the Families Afield initiative to get more youth involved in hunting and outdoor activities. The group is suing the federal government to reinstate Endangered Species protection to western gray wolves.

Maybe Rush sees something in the Humane Society that the rest of us have missed. Let’s give him the chance to explain himself. I encourage all hunters, fisherman and trappers around the nation to call Rush’s radio show and get his perspective. Call his toll-free line at 1-800-282-2882 from noon to 3 p.m. Eastern Standard Time on weekdays or email Rush at elrushbo@eibnet.com. Or you can mail a letter to:

Rush is too smart, too experienced and too clued in to the issues of America outside the Big Apple or the Beltway to be duped by the Humane Society. Call him up and see what he has to say for himself, and more importantly, why America’s hunters and outdoorsmen should still listen to his show.