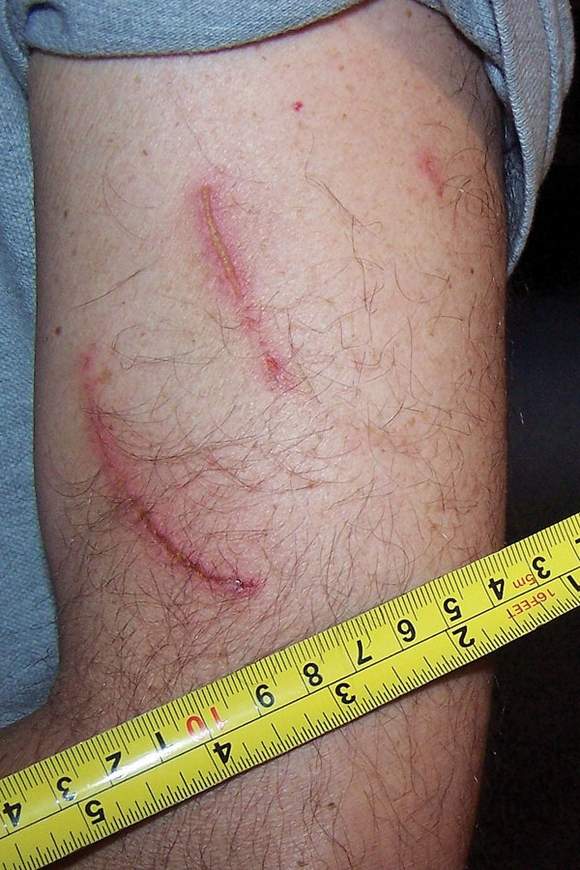 “I was on the side of a hill. The sun was out; it was an absolutely gorgeous day. I was tucked in next to a stone wall that had some brush along it,” Donati later told the Nashua (NH) Telegraph newspaper.

“So I’m purring and I’m putting away, and all of a sudden, it was like I was hit by a giant sack of grain,” he recalled.

But the “sack of grain” had claws, spotted fur, a short, bobbed tail and weighed about 35 pounds. And it had completely bowled over the stunned 49-year-old hunter who hails from Gardner, Mass.

Within seconds, Donati regained his composure and the two startled creatures stared at each other for a moment, as they tried to figure out what had just occurred.

“He got about 10 feet and he stopped and turned and looked at me,” Donati said. “It was a beautiful bobcat.”

Then it was gone.

Assessing the damage, Donati soon realized the encounter had left him with deep scratches on his arm and head. He used his cell phone to call his longtime hunting buddy, David Peet.

“He goes, ‘I just got attacked by an effing bobcat!'” Peet, 48, told the Nashua paper. “I’m like, OK. I’m waiting for the punch line, and I could hear him breathing really heavy. He said ‘I’m bleeding all over the place!'”

Donati was able to walk out the woods and drive to his physician’s office, where he received antibiotics and vaccines for tetanus, diphtheria and pertussis. On his doctor’s recommendation, he also began precautionary treatment for rabies.

And even though game and fish biologists officially consider the incident to be an “unprovoked attack,” Donati prefers to believe the wildcat was deceived by his stellar turkey-calling skills.