As a direct result of the resurgent interest in 1930s bank robber John Dillinger with the July 1 release of... 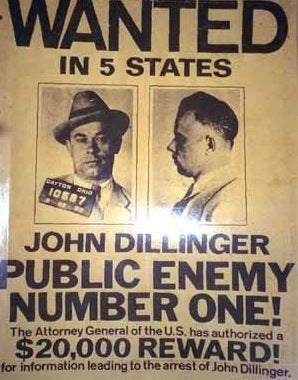 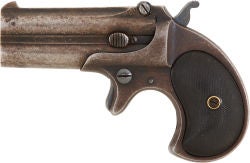 As a direct result of the resurgent interest in 1930s bank robber John Dillinger with the July 1 release of the blockbuster movie “Public Enemies,” a pair of firearms inextricably linked to the Depression-era bad guy will be auctioned in coming days.

First, the Remington .41 cal. rimfire double derringer found hidden in Dillinger’s sock at the time of his January 1934 arrest in Tucson, Ariz. will be auctioned by Dallas-based Heritage Galleries on July 25. The historic gun is expected to fetch between $35,000 and $45,000, according to the auction company’s Web site.

In addition, a .38 Colt Army Special carried by Capt. Timothy O’Neil of the East Chicago Police Department on the day Dillinger was shot and killed outside the Biograph Theater will be offered for auction on July 22–a date that coincidentally marks the 75th anniversary of the gangster’s demise.

Press material from the auctioneer notes that the derringer “bears serial #L97255 and retains most of the original blue on screws, hammer, and trigger; the balance with the original blue-gray matte finish mixing with gray patina. Perfect grips, mint bore, mechanically fine.”

The tip of the barrel release lever is broken, something that is not uncommon with the model, according to gunsmiths and collectors of the vintage gun.

Manufactured by Remington Arms, the unique firearm marked the first of the derringer genre, with each barrel able to fire individually by means of a pivoting firing pin operating on a ratchet. About 150,000 of the guns were manufactured between about 1866 until around 1935.

Frankly speaking, the .41 rimfire cartridge of the era was considered anything but a powerhouse caliber, to be sure. It was sometimes said that a bullet fired from the pocket pistol would bounce off gun leather and fall harmlessly to the ground.

At the same time, some infamous gunfighters of the 1920s and 30s admitted they would rather take a slug from a .45 than from a .41 rimfire. They reasoned that a .45 cal. bullet would probably pass through a man and offer a treatable wound, while a .41 would probably remain imbedded, potentially festering and lead to deadly infection. (Remember, these were pre-penicillin days.)

In July 1934 Dillinger was extradited to Indiana where he faced murder charges. While incarcerated awaiting trial, he famously broke out of jail armed with a pistol carved out of wood.

Five weeks after his escape, on July 22, 1934, he was killed “in a hail of gunfire” while leaving the Chicago theater by FBI agents and other authorities, including Capt. O’Neil. Though some law enforcement historians question whether bullets fired from O’Neil’s .38 Colt actually hit “Public Enemy Number One” on that sultry July evening, the gun is expected to bring as much as $12,000 at this month’s auction.