You can forget about getting a Browning Buckmark tattoo or a 3-foot wide pickup widow decal of the famous deerhead... 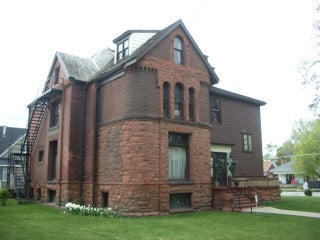 You can forget about getting a Browning Buckmark tattoo or a 3-foot wide pickup widow decal of the famous deerhead logo.

The Newshound has found the ultimate abode for the unapologetic gun nut and devotee of all things Browning.

Built in 1900, most of the house is original, including a hardwood banister stretching from the entry all the way to the third-floor attic, beveled windows, hardwood floors and fireplaces throughout.

Widely considered a genius and inarguably the most famous gun maker in the history of the universe, perhaps Browning’s most enduring legacy is the short recoil design behind the 1911 handgun, which remains the pre-eminent operating system in today’s semi-auto handguns, nearly a century after it was first introduced.

The “ultimate gun-lover’s dream house” is located at 505 27th St. in historic Ogden. While much of the interior is original, your wife will be pleased to know the kitchen has been update since 1900.

The downside? It’s BYOB (Bring Your Own Browning)!