You may have heard or read about the invasive species of Asian carp that has spread northward, up the Mississippi... 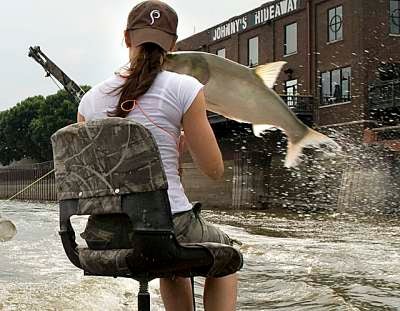 You may have heard or read about the invasive species of Asian carp that has spread northward, up the Mississippi River and into its tributaries in recent years. Not only does the fish grow quickly and grow large, but it has the unusual propensity for leaping high into the air when rousted by the sound of a passing outboard motor.

Boaters who frequent waters occupied by the exotic species have learned to take special precautions, like wearing protective gear or arming themselves with garbage can lids to use as shields to deflect the airborne bottom-feeders.

Not surprisingly, many hunters, (who are experts at producing lemonade when they are dealt lemons), have succeeded in making the best of the situation. These days, especially along parts of the Illinois River near Peoria, on any summer day you are likely to see numerous boaters armed with bows and arrows, cruising the waters in search of flying carp.

Such was the case earlier this summer, when Jodi Barnes was bowfishing for Illinois River carp with her fiancee, Chris Brackett, whose company, Brackett Outdoors, produces DVDs featuring high-intensity carp-slaying action.

“We were going really slow because that seems to get them to jump really high,” Brackett told my good friend Jeff Lampe, the outdoors editor for the Peoria Journal-Star. “Jodi had shot at one and was leaning forward to reel in her arrow when another fish came out of nowhere to her right and then hit her in the jaw.”

The smackdown was caught with incredible precision by photographer Bill Konway, a passenger in the boat. The resulting impact broke Barnes’ jaw.

Ms. Barnes is currently recovering from her carp-bashing, and her diet will reportedly consist of smoothies and mashed potatoes for the next four weeks.

In the meantime, Beckett is scheduled to take film crews for the National Geographic Channel’s series, “Hooked” in search of slimy, flying target this coming weekend.

Until we hear otherwise, we assume the engagement is still on.