For the rest of his life, Caden Smith will probably relish the time he caught a catfish weighing more than... 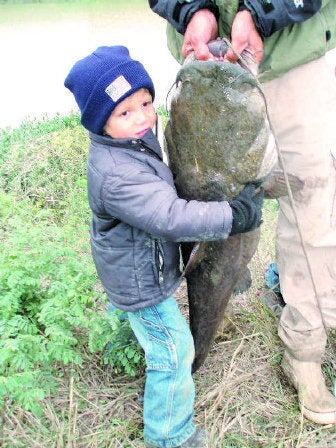 For the rest of his life, Caden Smith will probably relish the time he caught a catfish weighing more than himself–a feat he will quite likely never surpass. That’s because last weekend Caden, a 40-pound 4-year-old, caught and released a 45-pound flathead catfish from Texas’ Trinity River.

Caden was fishing with his family near his home in Joshua, Texas when he hooked the fish of his short lifetime.

“He battled for his life,” his uncle Dan Smith told the Ft. Worth Star-Telegram.

Proud mom Natalie said the fish was as big as her son.

“When they got it out, he hugged it,” she said.

Though not a record breaker–a 56-pounder caught in the Trinity in 2004 holds that distinction for a junior angler–it is an impressive feat nonetheless.

Per the wishes of the newly seasoned angler, the bottom-feeding behemoth was released, to fight again.