A Fort St. John, British Colombia bowhunter saved his bacon last week by plunging one of his hunting arrows into... 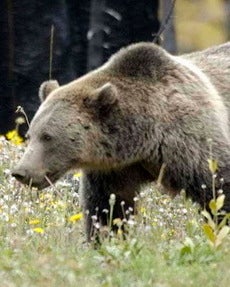 A Fort St. John, British Colombia bowhunter saved his bacon last week by plunging one of his hunting arrows into the neck of an attacking grizzly bear at his Kechika River hunting camp.

The action began when Rory Chapple, 39, heard the telltale huffing sounds of an agitated grizzly bear coming toward him. Though he was armed with his hunting bow, there was no time to nock an arrow, much less draw, aim and fire.

As the bowhunter back-pedaled and the sow grizzly moved closer, he concluded his only defense was to use one of his hunting arrows as a lance. When the grizzly made its lunge, Chapple jabbed–Zorro style–and the broadhead-tipped arrow sliced the bruin’s throat, inflicting enough damage to thwart a further advance.

“It was a glancing blow but as soon as that arrow struck home, she went from gnarling and growing and huffing at me to gurgling,” Chapple said.

The father of two and president of his local archery club escaped the ordeal with ripped pants, a sore back, and a whale of a story to tell.