Here’s a story to file under the Newshound’s heading of “be careful who you pick a fight with.” It’s also... 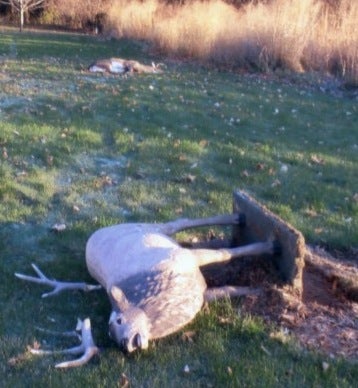 Here’s a story to file under the Newshound’s heading of “be careful who you pick a fight with.”

It’s also a great indicator that the whitetail rut is well underway in the state of Wisconsin.

A 7-point buck point obviously chose the wrong adversary in his testosterone-induced attempt to exhibit male dominance when it challenged a 640-pound concrete elk statue in the yard of Mark Brye in rural Viroqua, Wisc.

Brye told outdoor writer Bob Lamb of the LaCrosse (Wisc.) Tribune that each morning he looks out in his yard at the stately bull elk given to him by his son and daughter because he likes to hunt elk out West. But one morning last week, the bull, well, wasn’t exactly standing upright.

The massive molded ungulate was instead resting on its side, its antlers broken and scattered in pieces on the ground.

And there, some 20 feet away, lay the 180-pound lifeless buck, its skull crushed from its repeated impact with the unforgiving lawn ornament.

Brye snapped a photograph to document the bizarre battle and its aftermath.

“I could tell the buck poked the statue a couple of times by the chipped paint on it,” Brye said, adding that the deer must have rammed it like a mountain goat because of the damage inflicted to its own antlers and body.

A Wisconsin DNR conservation officer investigated the unusual incident and tagged the buck for the family’s personal use. The resulting venison tenderloins will undoubtedly generate plenty of stories as they are savored as table fare at the Brye household in coming months.

And what about the battered bull elk?

Brye says he might attach the buck’s antlers on the bull to mark the fateful November battle, though he’ll need some help to return the heavy statue to its feet.

“I can’t tip it back up until I get a whole bunch of guys to help me,” he said.