It’s the time of year when deer become increasingly active–and unpredictable. For example, a video surveillance camera recorded a deer... 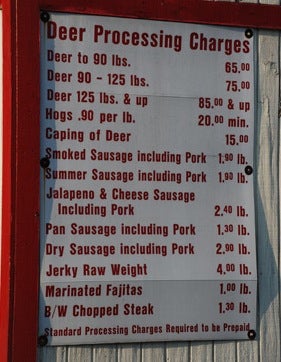 For example, a video surveillance camera recorded a deer crashing into the plate glass window of a northern Illinois venison processor one morning last week, leaving it shattered before scampering off in a nearby wooded area.

According Dave Alwan, owner of Echo Valley Meats in Bartonville, Ill., he received a call around 6:45 a.m. from a woman who was driving nearby and saw the deer in action.

While Alwan and police initially thought the deer had entered the butcher shop, Alwan said video surveillance showed the deer crashing into the window and taking off. The animal was not found.

Bartonville Police Chief Brian Fengel said the broken window was valued at $500, and no injuries were reported. He said he wasn’t surprised by the report.

Not surprisingly, the shop owner recognized the humor and irony in the early morning incident.

“We’re so good, they’re just dying to get in,” Alwan joked.