Luckiest Deer Hunter of the Year (So Far)

As is so often the case, a Southern Illinois bowhunter’s “deer of a lifetime” also comes with a “hunting story... 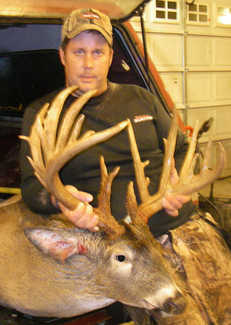 As is so often the case, a Southern Illinois bowhunter’s “deer of a lifetime” also comes with a “hunting story of a lifetime.”

In fact, here at The Newshound, we think Joe Graber’s 25-point non-typical that green-scored around 215 inches qualifies for the luckiest shot of the season (so far).

When the massive Madison County buck walked 40 yards from Graber’s treestand on October 25, the archer drew his bow and took aim at the lung area–just like he’s done with dozens of other deer he’s successfully taken during his past 35 years of hunting.

Reported last week that something totally unexpected occurred when Graber loosed his arrow at the biggest deer he’d ever seen on the hoof: The arrow deflected off an unseen branch–missing its mark. Instead of striking the deer’s vitals, as expected, the hunting shaft traveled straight at the buck’s head, entering its ear with a resounding whack.

“I heard it hit,” Graber told Kloeckner. “It sounded like a firecracker went off.”

After the hit, the deer flipped up in the air, skidded down an embankment and dropped off a 20-foot cliff into a creek, where it subsequently drowned.

It took several hours for Graber and a friend to retrieve the deer in the rain and approaching darkness. As word spread about the details of the kill, Graber said he took some good-natured heat from fellow deer hunters.

“It’s not like I aimed for his head,” Graber explained. “I shoot my bow all summer, and I can keep it in a 3-inch circle at 35 yards pretty much with my eyes closed.

“It wasn’t like I didn’t know what I was doing or didn’t feel comfortable with the shot. It hit something, and I got lucky.”

No argument there, Joe. Lucky, indeed.