It’s the busiest time of year for those men and women who are charged with protecting our natural resources and... 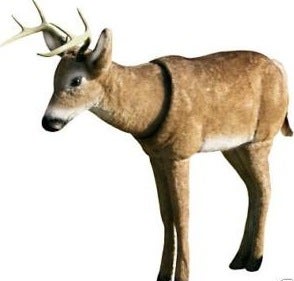 It’s the busiest time of year for those men and women who are charged with protecting our natural resources and enforcing state game and hunting regulations.

More and more state conservation agencies are using innovative methods to apprehend those ne’er-do-wells who take game animals out of season or ignore game laws meant to protect and manage our valuable wildlife resources.

One anti-poaching tool becoming increasingly popular with game agencies across the country is the mechanical and motorized deer decoy. Made to look and move like the real thing, the decoys are often placed in “no-shoot” situations–like in a field at night or on private property located across an public road where shooting and hunting are prohibited. Wildlife law enforcement officers stake out such locations, waiting for game law scofflaws to come along and do something stupid.

Unfortunately, more often than not, they usually do.

During the recent firearms deer-hunting season, Sgt. Ron Kimmerly with the Michigan Department of Natural Resources was operating such a surveillance effort with a robotic deer placed on private land in Taymouth Township when a man in a pickup pulled up, took notice of the deer, stopped and aimed a rifle out the truck window.

Without hesitation, the man began shooting at the faux whitetail buck.

“After each time this guy shot, I made the deer look at him, and after he shot, I had it look away,” Kimmerly told the Saginaw News. He said the man was accurate, but after three shots struck the decoy deer in the chest and it still didn’t drop or run, a would-be poacher realized something was afoul and began to drive away.

When assisting officers pursued and stopped the alleged lawbreaker, they found that in addition to violating trespassing and weapons transportation regulations, he was not wearing hunter orange clothing on half his body and visible on both sides as required under state law.

In fact, he wasn’t even wearing clothes.

Sgt. Kimmerly said the man–who claimed he was on his way to a friend’s house when he stopped and shot at the decoy–was clad in flannel pajamas and house slippers.

And none were colored blaze orange–marking yet another hunting violation.