Buck On A Bus

To many city folks, the thought of a dead deer being transported in the aisle of a public school bus... 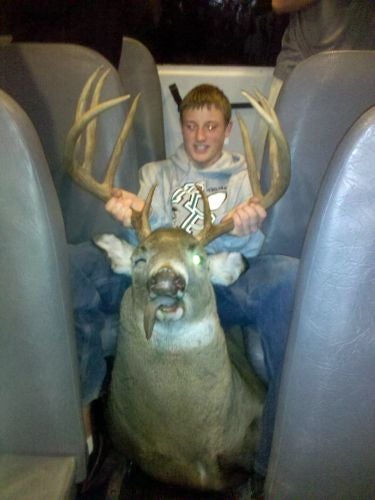 To many city folks, the thought of a dead deer being transported in the aisle of a public school bus might seem unusual, even to the point of being distasteful.

But it didn’t bother the members of the Rushford-Peterson High School basketball team, whose bus hit and killed a magnificent 10-point buck while returning from a game in a holiday tournament one night last week.

In fact, for the boys and their coaches who call rural southeastern Minnesota their home, it seemed downright natural–and absolutely the right thing to do.

“We’re all deer hunters, and to see a deer of that quality, well, it’s a bad way to go,” coach Tom Vix told the Minneapolis Star-Tribune newspaper. “It’s sad that some hunter didn’t have that privilege. And that poor deer made it through bow season, two shotgun seasons, a muzzle-loader season and only had two days left. So that’s kind of tough.”

After the bus smacked the huge whitetail on that cold and icy December 28th night, the driver stopped and the coaches got out to evaluate the damage and check on the deer. There was minimal damage to the bus, and the deer lay stone dead, just yards away from the point of impact.

And what a deer it was.

The 180-class, 280-pound whitetail had a 22-inch spread and was the biggest buck most of the coaches or the boys had ever seen. And for that entire busload of Minnesota deer hunters, it seemed like a waste to just leave it by the roadside.

So Coach Vix phoned the DNR to obtain permission to keep the animal, and after doing so, it was loaded into the bus via the emergency back door.

Later, as word spread of the basketball team’s “trophy,” an area taxidermist volunteered to mount the head to be displayed in the school’s natural resources classroom.

“Sometimes things happen and you have to react to them,” Vix told the newspaper. “If this deer can be in the classroom and educate kids and be a memory that’s positive, that’s good.”