Caught In The Act!

Their first mistake was filching the stacking treestand steps belonging to a Michigan State Police detective. The second was committing... 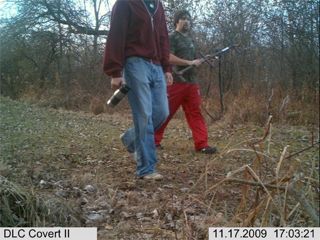 Their first mistake was filching the stacking treestand steps belonging to a Michigan State Police detective. The second was committing the act in view of the detective’s hidden trail camera.

The confession took place just hours after an article about the incident appeared in the Midland Daily News on Jan. 1. A photo of the two suspects caught on Michigan State Police Detective Sgt. Andrew Longuski’s camouflage trail camera accompanied the news story.

“I had multiple calls coming in, saying ‘I know who that is,'” Bay City Post Trooper James Willing told the Daily News. It wasn’t long before one of the men pictured in the photo called and identified himself and his companion to Willing.

According to the State Police trooper said the caller said he thought the treestand was on Chippewa Nature Center property, and that the owner had no right to have it there.

“Unfortunately for them,” Willing said, “he did.”

Charges were pending against the photographed duo.