Here at the Newshound, we’re continually supportive of the tireless efforts put forth by those men and women who enforce... 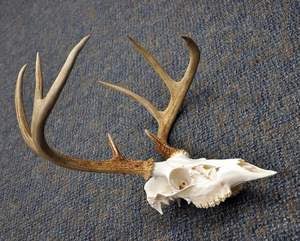 Here at the Newshound, we’re continually supportive of the tireless efforts put forth by those men and women who enforce state and federal game and fish regulations. And, for the most part, we promote respect and strict adherence to state game and hunting-related laws.

But an incident occurring in Virginia this week has us scratching our head in confusion and bewilderment, to say the least.

On Wednesday, a conservation officer with the Virginia Department of Game and Inland Fisheries officially charged Martinsville Police Chief Mike Rogers with practicing taxidermy without a permit–a class 4 misdemeanor.

According to the charges, Chief Rogers was guilty of performing taxidermy on his recently taken whitetail buck without first obtaining an annual state license, which costs $40. The chief’s “taxidermy” consisted of removing the fur and flesh from the skull of his deer–resulting in what is commonly referred to as a European mount.

Chief Rogers did not contest the citation and has already paid a $121 fine to the Henry County General District Court.

The Martinsville Bulletin newspaper reported that citing VDGIF officer Matthew Silicki stressed the offense was neither criminal nor purposeful.

“There was not any type of (criminal) negligence,” Silicki said. “It was genuinely an honest mistake.”

In the meantime, Chief Rogers was both confused and surprised by the citation–as are we here at The Newshound.

He said he does not consider himself to be a taxidermist but he would have gladly paid the required $40 fee if he had known it was necessary for a self-done skull mount.

“In nearly every dictionary I have looked at, taxidermy is defined as the art or operation of preparing, stuffing and mounting the skins of dead birds and animals for exhibition in a lifelike state,” said Rogers.

A European mount looks “anything but lifelike,” he said.

So, what do you think?