On Wednesday, Wyoming Governor Dave Freudenthal signed legislation adopting an official Wyoming state code based on the tenets known in... 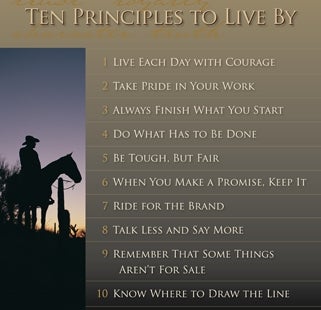 On Wednesday, Wyoming Governor Dave Freudenthal signed legislation adopting an official Wyoming state code based on the tenets known in the West as “Cowboy Ethics.”

Although the historic Code of the West was unwritten, cowboys, trappers, hunters and others in the U.S. frontier knew it was about maintaining honesty, integrity and courage in a wide-open region where the affects of government barely reached and laws were not always enforced.

More recently, the Ten Principles were outlined in a popular 2004 book, Cowboy Ethics: What Wall Street Can Learn from the Code of the West, by retired Wall Street investor James Owen.

The measure’s sponsor, Sen. Jim Anderson, (R-Glenrock), said Owen’s book captured his interest, and inspired him to introduce the bill after seeing the December premier of a related video project, “The Code of the West: Alive and Well in Wyoming.”

“There’s a work ethic in all things that we do, particularly in government,” Anderson said.

Here are the Ten Principles of Cowboy Ethics:

1. Live each day with courage

2. Take pride in your work

3. Always finish what you start

6. When you make a promise, keep it

7. Ride for the brand

9. Remember that some things aren’t for sale

10. Know where to draw the line

Even though the bill is merely a symbolic gesture, carries no criminal penalties and is not meant to replace any civil codes, here at the Newshound, we think it reflects a pretty valuable ideology.

Perhaps Capitol Hill should adopt something similar. And adhere to it. What are your thoughts? We’d love to hear.