The lack of a required crew member’s fishing license may cost an angler in North Carolina’s 52nd Big Rock Blue... 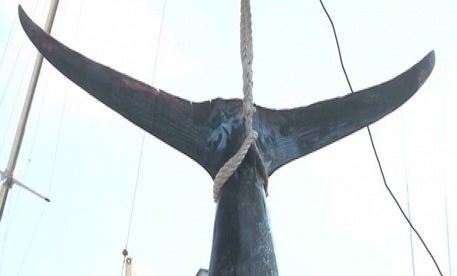 By Monday afternoon, it was still uncertain exactly how the tournament organizers would officially decide how to address the unusual infraction.

After conducting an investigation that included a customary polygraph test to crew members on Sunday, tournament officials initially announced that the winning boat–the Citation–would be stripped of its title and the prize money that went with it. Then, on Monday, they said they would hold off making an official decision about the results of the event.

“The mate in question was cited Sunday after the Big Rock had notified our marine patrol that there were some concerns,” NCDMF spokeswoman Patricia Smith said Monday. “They had notified us Saturday night, and our agents interviewed the fisherman on Sunday.”

The 883-pound blue marlin caught the first day of the week-long tournament by Andy Thomasson aboard the Citation was 355 pounds heavier than the second-place fish and surpassed a 10-year tournament record by 52 pounds. It was nearly twice as heavy as last year’s winning fish.

The Charlotte Observer reports today that Big Rock said the investigation was continuing in consultation with the N.C. Division of Marine Fisheries and the Attorney General’s Office. A spokeswoman for the Division of Marine Fisheries confirmed that Peter Martin Wann, 22, of Alexandria, Va., was cited Sunday for fishing without a license, which carries a $35 fine and $125 in court costs.

“It hurts,” said Thomasson. “We didn’t do anything wrong. But one of our people did. He failed to get a fishing license, but we didn’t know it. He told us he had it. He didn’t. So you take a man for his word, you know?”