In recent years, there have been many examples of zero-tolerance firearms policies run amok in public schools and universities that,... 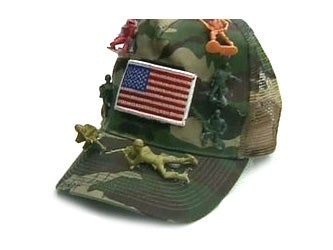 In recent years, there have been many examples of zero-tolerance firearms policies run amok in public schools and universities that, in the most literal sense, exhibit intolerance to reason and good judgment.

Finally, here’s a zero-tolerance tale with a happy ending!

When second grader David Morales came to class at Tiogue School in Coventry, RI wearing a camouflage cap with a small American flag attached along with several green plastic toy Army figures holding tiny guns, he was told it was a violation of the school’s no-weapons policy. Contacted by David’s teacher about the incident, mom Christan Morales explained that her son was simply trying to honor American troops in his own personal way.

The story of David’s plight soon hit the gun blogs and talk radio airwaves, where many firearms owners and military supporters took note–including Lt. Gen. Reginald Centracchio, the retired commander of the Rhode Island National Guard. And last week, Centracchio appeared with the youngster on a local radio show and thanked him for supporting the troops. There he presented Morales with a challenge coin to recognize excellence and a certificate that named him an honorary brigadier general.

“David, this is an opportunity for us to thank you for remembering our soldiers,” Centracchio said.

The retired commander also met with Coventry School officials, who subsequently agreed to change the school policy to allow future exhibitions of military support and patriotism like David’s.

A follow-up e-mail sent to the media by Coventry schools superintendent Ken Di Pietro explained that the no-weapons policy shouldn’t limit student expression, especially when students are depicting “tools of a profession or service,” such as the military or police.

“The event exposed how a policy meant to ensure safe environments for students can become restrictive and can present an image counter to the work of our schools to promote patriotism and democracy,” Di Pietro said.

So while we’re on the subject of hats, we tip ours to everyone involved: David, Lt. Gen. Centracchio and Supt. Di Pietro!