A combination of observant deer watchers, a shed antler hunter with a good memory, savvy detective work by a pair … Continued 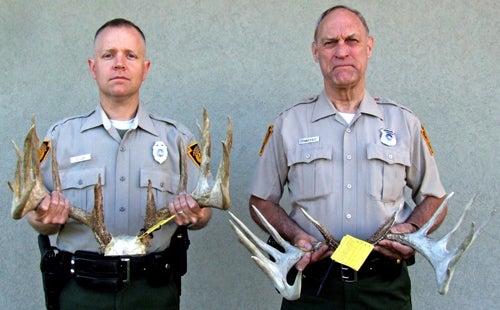 A combination of observant deer watchers, a shed antler hunter with a good memory, savvy detective work by a pair of Pennsylvania Wildlife Conservation Officers and modern genetic testing led to the conviction and sentencing of a Pennsylvania trophy deer poacher last week.

In a sentence handed down June 29 by Senior Magisterial District Judge Roger Estep in York County, PA, Michael Eugene Sponseller Jr., was found guilty and sentenced to pay $1,100 in fines, $622.50 in court costs and $5,000 in replacement costs for the unlawful taking of a trophy-class whitetail in 2009. The defendant also faces revocation of hunting privileges for up to six years.

Sponseller was found guilty of the unlawful taking and possession of game or wildlife; unlawful devices and methods for using a motor vehicle to locate the deer; trespass on private property while hunting; and false or fraudulent statements on reports.

The court determined Sponseller and another individual were traveling in a vehicle in West Manchester Township in September 2009 when they spotted a 16-point white-tailed deer in an adjacent field from the roadway. Using archery equipment, Sponseller stalked and killed the deer during a closed season.

Court records show the defendant took possession of the poached buck and checked it more than 100 miles south in Lycoming County–where archery deer season was underway.

Acting on a tip by a citizen that the 16-pointer may have been poached, York County WCO Chad Eyler and Deputy WCO Robert Simmonds began their investigation that initially led to Sponseller in October. However, the most damning evidence came when a West Manchester Township police officer produced a set of 14-point shed antlers that were found in the vicinity of the poaching in early 2009. A subsequent DNA extraction from both sets of antlers performed at East Stroudsburg University matched positively as coming from the same deer.

“While we are pleased with the successful conclusion of this case and the fact that Sponseller was held accountable for his crime, this is an unfortunate example of how one violator can steal wildlife from legitimate hunters and others who enjoy seeing wildlife in Pennsylvania,” said WCO Eyler.