Death of the Carp King

In England, anglers really, and I mean really, love their carp. They love them so much, that when a record... 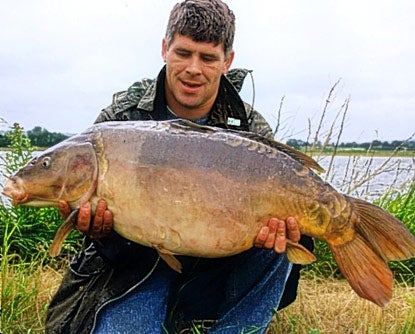 In England, anglers really, and I mean really, love their carp. They love them so much, that when a record carp named Two-Tone (his skin tone was two colors) washed up dead, they flocked to the Internet writing comments and poems in a tribute to the fish. There are even plans to burry the 68-pound carp and have a memorial service for him.

Here’s an excerpt from the London Evening Standard: “The fish will be buried next to Conningbrook Lake at Mid Kent Fisheries in Chilham, near Canterbury, next weekend and a plaque will mark his grave. Anglers will hold a wake and raise a glass of champagne for him afterwards.”

According to the Evening Standard, Two-Tone was about 45 years old and died of old age. He was caught about 50 times throughout his life and had become an obsession for local anglers. Some spent more than 15 years trying to catch Two-Tone with no luck, others spent so much time chasing him they were divorced by their wives.

“He’d had a hard winter followed by a tough spring, but there wasn’t a blemish on him – no scars, ulcers or any other sign of damage. He was just old – he must have been 40 or 45,” Chris Logsdon, owner of Two-Tone’s pond, told the Angling Times. “It’s very sad, the end of an era, because Two Tone was part of carp fishing history. He was stocked into the lake at 12 pounds in 1982 and no English fish came close to toppling his record from 2001 onwards.”

Farewell Two-Tone, may you swim on forever in that big carp pond in the sky.