Onalaska, Wisc. angler Darren Zumach was fishing for bass on a Mississippi River slough earlier this month when he received... 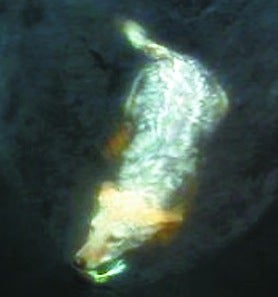 Onalaska, Wisc. angler Darren Zumach was fishing for bass on a Mississippi River slough earlier this month when he received a cell phone call from his buddy Bruce Chandler, who was in a separate boat in the same general area. His pal and sometimes-tournament partner informed him that he’d just hooked a 25- to 30-pound pound coyote and needed some help landing and releasing it.

“What have you been smoking?” Zumach matter-of-factly asked his buddy.

But sure enough, when Zumach motored to Chandler’s location near Goose Island, he found the Holmen, Wisc. fisherman engaged in an unlikely on-the-water battle with an adult coyote that had leapt from the tall grass to attack his shoreline presentation of an Ish’s Phat Frog topwater bass lure.

“In a blink of an eye, it was that quick. It looked as shocked as I was,” Chandler, 62, later told outdoor writer Bob Lamb of the LaCrosse Tribune. “(And) all I thought was that coyote had my $9 frog that I had just bought and I wanted it back!”

When Chandler used his trolling motor to maneuver the coyote into open water, he found the animal became surprisingly submissive.

“I never saw anything funnier. Here was Bruce, holding onto the pole and motoring slowly down the slough, with the coyote trailing behind,” Zumach told the local paper. “I took a picture with my cell phone (shown here) because I knew nobody would believe us if I didn’t.”

Working in tandem, as Chandler held the line tight, Zumach used some needle-nosed pliers to remove the hook from the coyote’s lip and set the bewildered critter free. The animal returned to the shore, where it rested for awhile and then disappeared.

It didn’t take long for the story of Chandler’s unusual catch to circulate among the local angling community. At a tournament the following day, he was the butt of a multitude of jokes and good-natured ribbing.

“Some guys said they wanted to check my livewell to see how many coyotes I had caught that day,” he said.