Three men are looking at big fines and possibly even jail time after illegally catching and selling panfish last winter... 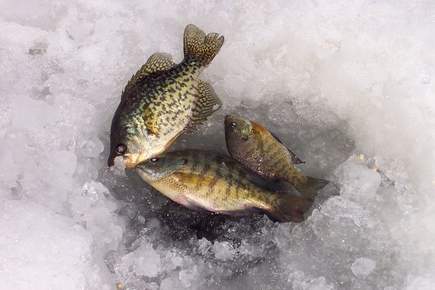 Three men are looking at big fines and possibly even jail time after illegally catching and selling panfish last winter in Vermont and New York. In what has been dubbed “Operation Panfish Plunder” Ronald Martel, Garth Martel and Richard Webster caught illegal limits of panfish in Vermont and then took them to New York to sell at a sporting goods store.

It’s not illegal to sell panfish in New York or Vermont, but since the trio transported an illegal amount of fish across state lines, they violated a federal statute called the Lacey Act. The maximum penalty is five years in jail and $20,000 in fines per charge. They’ve each been charged with four felonies in federal district court.

The creel limit for panfish is 50 and the group sold at least $350 worth of fish, which bumped their conduct up to a felony under the Lacey Act. Wildlife officials would not specify how many fish they kept or how much money they made. According to the Rutland Herald, panfish can sell for more than $4 per pound in the area.

The trio of plunderers was caught after other anglers noticed them keeping an excessive amount of fish. After conservation officers got wind of the operation, they set up surveillance cameras in the areas the three men liked to fish. On camera, officers caught the men “grossly overlimiting,” according to the Herald.

“This stuff isn’t going to be tolerated,” conservation officer Craig Morrocco told the newspaper. “These guys are stealing from the sportsmen, stealing from everybody.”