Another Oil Rig Explosion in the Gulf

UPDATE: A mile-long sheen is now visible near the site of the oil rig explosion. The sheen is about 100... 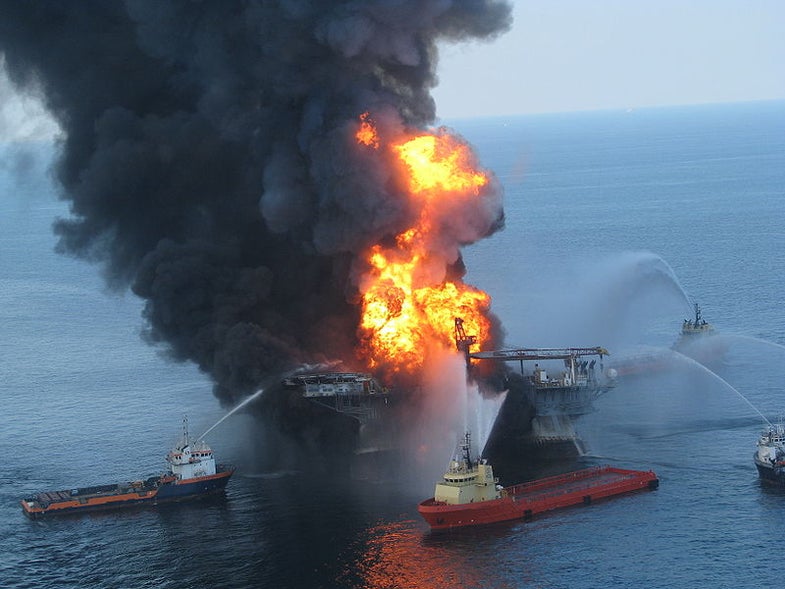 UPDATE: A mile-long sheen is now visible near the site of the oil rig explosion. The sheen is about 100 feet wide, but it is unknown how much oil has been leaked.

The Associated Press reports that another offshore oil platform has exploded in the Gulf of Mexico Thursday. The rig is about 100 miles off the coast of Louisiana and it’s west of the Deepwater Horizon site.

Thirteen people were on the rig when it exploded, but no one was killed in the blast. One person was injured, but the extent of the injury is not known.

Officials also do not yet know what caused the explosion or if any oil is is leaking into the Gulf. The platform is located in 340 feet of water and is owned by Mariner Energy of Houston. According to the Department of Homeland Security, the platform was not producing oil and gas at the time of the explosion.

“We obviously have response assets ready for deployment should we receive reports of pollution in the water,” White House Press Secretary Robert Gibbs told the Associated Press.

This explosion comes just months after the massive explosion at B.P.’s Deepwater Horizon killed 11 people, leaked 206 million gallons of oil into the Gulf and ruined fishing and business in much of the region.

Even if today’s blast does not result in another oil leak, it should serve as a reminder that even though the B.P. leak has been mostly capped, there are still major oil issues to be taken care of in the Gulf.

Photo: The Deepwater Horizon oil rig exploded in April, killing 11 people and causing one of the greatest ecological disasters of all time.