A coalition of neighborhood groups in San Francisco’s Mission District has launched a campaign to block the reopening of city’s... 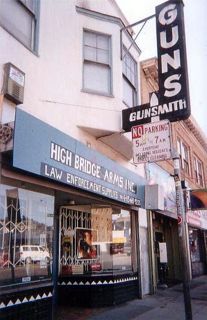 A coalition of neighborhood groups in San Francisco’s Mission District has launched a campaign to block the reopening of city’s only–yes, ONLY–firearms retailer.

High Bridge Arms, Inc., which has been located near Mission and Valencia since the 1950s, closed earlier this year. Since that time, store renovations have taken place and a new manager is preparing to reopen the full-service gun shop and law enforcement supply store.

But the Northwest Bernal Alliance and other neighborhood groups say they’d like to see the store’s zoning permit denied in favor of a more “family friendly” business, according to San Francisco Chronicle columnist Phil Bronstein.
Alliance member Jaime Ross claims he isn’t against firearms ownership per se, just that he’d “rather have something the neighborhood could enjoy–a laundry or wine and cheese shop.”

For a city that restricts plastic grocery bags, sugary soft drinks and the retailing of puppies, can anything be considered extreme?

Still, High Bridge manager Steve Alcairo said he hopes he can reach out to those in the neighborhood and find some common ground. After all, it’s not like he’s selling marijuana, which we surmise is far easier to legally obtain in the city than a box of .9 mm handgun ammo.

“This is the most scrutinized and regulated business on the whole street,” Alcairo said. “We’re watched more closely than the health department watches restaurants.”

In reality, one would think the neighborhood residents would relish the reopening of High Bridge Arms, as its best and most visible customers are members of the Bay Area’s law enforcement community–both on and off-duty.

But, it’s not about common sense. After all, it’s San Francisco.