No Packing Picnickers in Public Potty

Public gatherings and picnics celebrating and promoting the legal open-carry of personal protection firearms have become increasingly common in several... 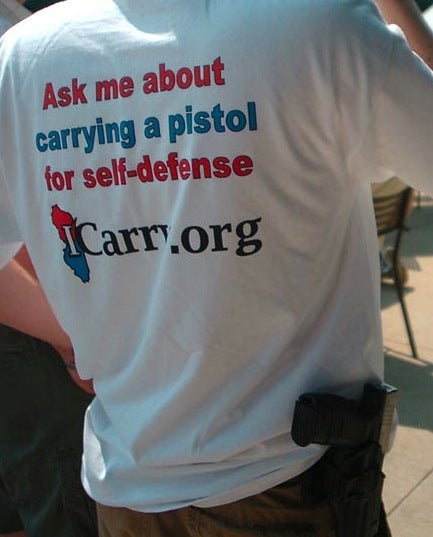 Public gatherings and picnics celebrating and promoting the legal open-carry of personal protection firearms have become increasingly common in several states this year, particularly in Wisconsin, where concealed carry remains prohibited by law.

The promoters of an open-carry picnic scheduled for a West Baraboo, Wisc. public park next week are being told by village officials that participants will be required to disarm before using the restrooms located there.

The West Baraboo village attorney announced last week that both village ordinances and state law prohibit the carrying of firearms in public buildings. When that law is applied to the Sept. 25 picnic organized by advocates of the right to carry unconcealed firearms in public, attorney Mark Steichen said the park’s restrooms are considered public buildings where open carry is prohibited, though the open-sided park picnic pavilion is not.

“Is that what’s really in mind (by the law) for security? Probably not,” Steichen was quoted as saying in the Baraboo News Republic. “They’re probably thinking of schools and courthouses. But that’s the way the law reads.” He added there are no provisions in the law for the village board or other public official to make an exception to for picnic participants.

In other words, there will be no packin’ in the potty.

Village Public Works Director Bob DeMars said picnic organizers spoke with him about installing temporary portable toilets at the park, though he was concerned about possible vandalism.

“In that case they are left overnight, (if) they get tipped over, they get dumped into the river,” DeMars said.

Local resident Don Marso, a retired federal corrections officer who is organizing the event, assured the village that he and the rally participants would cooperate fully regarding the restroom requirements.