It’s a well-documented fact that it doesn’t require rocket-scientist credentials to break wildlife laws and take game animals outside of... 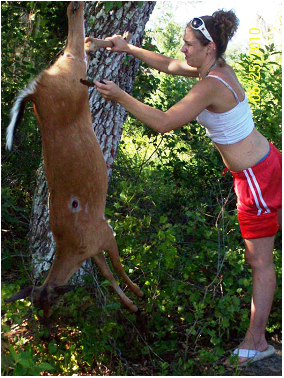 It’s a well-documented fact that it doesn’t require rocket-scientist credentials to break wildlife laws and take game animals outside of designated seasons. But you’d think poachers would know better than to post the results of their dirty deeds on the popular social networking site, Facebook.

The Florida Fish and Wildlife Conservation Commission (FWC) announced this week that its officers cited Inverness residents William Andrew Buchanan, 21, and Tara Anne Carver, 27, when an investigation found they had illegally taken a whitetail deer and posted photos of them skinning the animal on Facebook.

When questioned by investigating FWC authorities, Buchanan confirmed he was in the photographs helping skin the deer, though he wouldn’t admit to shooting the animal or being present when the deer was killed, said Lead Investigator Jim Smith.

“Carver said she published the photographs on her Facebook page and that the deer was killed sometime in May,” Smith said. She blamed Buchanan for killing the deer but confirmed she had skinned it and stored some of the meat in her uncle’s freezer.

Incidentally, the FWC has created a specialized Internet Crimes Unit to monitor and collect evidence in cases just like this one. Why? Because they’ve learned from experience that poachers aren’t the sharpest tools in the shed.