Would You Eat This?

As an employee for Outdoor Life, I didn’t think there would ever come a day when I would be writing... 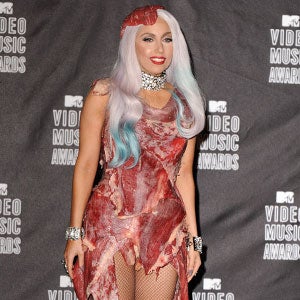 As an employee for Outdoor Life, I didn’t think there would ever come a day when I would be writing about Lady Gaga, but here it is (if you don’t know who Lady Gaga is, think Madonna from the 80s plus Brittney Spears after she went crazy).

Last week the singer wore a 50-pound dress made of meat to the the Video Music Awards that was designed by Argentinian fashion designer Franc Fernandez. The dress created a buzz among the media, disgusted some people, made other folks hungry and of course drew plenty of ire from PETA.

“Wearing a dress made out of cuts of dead cows is offensive enough to bring comment, but someone should whisper in her ear that there are more people who are upset by butchery than who are impressed by it–and that means a lot of young people will not be buying her records if she keeps this stuff up,” PETA said on its blog.

But amazingly the story doesn’t end here. According to eonline.com, the dress made from a cut of beef called matambre will be ground up and made into beef jerky.

“The dress will go through a process where it becomes a sort of ‘jerky’ and will be archived. Thank you,” the designer told eonline.com.

I’m not sure where or why you archive beef jerky, but I am pretty sure the only thing beef jerky is good for these days is eating. Now I’ve seen outdoorsmen eat some pretty weird stuff in the field — including shark fishing bait — but for me, beef jerky made from a meat dress falls in the grey area.

So, to all you Outdoor Life readers, on a chilly afternoon in the deer stand or duck blind, would you chow down on jerky made from Lady Gaga’s infamous meat dress? Comment below.