We doubt whether it will ever rate as a question on Jeopardy, but data compiled by a California university researcher... 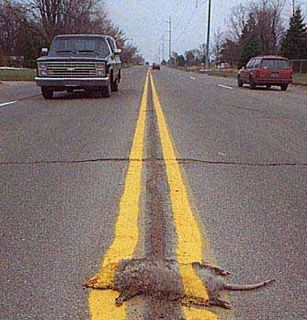 We doubt whether it will ever rate as a question on Jeopardy, but data compiled by a California university researcher has found that the most common carrion on Golden State highways and byways is raccoon.

The research being compiled by the University of California-Davis using volunteer observers of flattened roadway carcasses has found that raccoons account for the highest percentage of roadkill — roughly 12 percent.

That makes the raccoon the undisputed King of Roadkill–in California, anyway.

In case you’re wondering, rounding out the Roadkill Top 10 are the western gray squirrel, desert cottontail, black-tailed jackrabbit, barn own and western toad.

“Thousands of animals are killed on California’s roads every day, including endangered species,” Shilling said. “This is a threat to the state’s natural legacy and, for some species, their very existence.”

There was no immediate comment on Schilling’s intent to reduce roadkill from the buzzard and scavenger community.