Bang for the Buck

The first thing Hixton, Wisc. bowhunter Rodney Hurst did when he spotted the 10-point buck dragging what appeared to be... 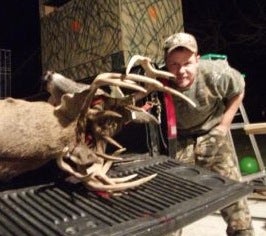 The first thing Hixton, Wisc. bowhunter Rodney Hurst did when he spotted the 10-point buck dragging what appeared to be an expired 12-pointer was to use his cell phone to call the state Department of Natural Resources in order to clarify the hunting regulations regarding the unique situation.

“A buddy of mine was combining corn and so I decided just to stand along side of his corn field and then all of a sudden here they came,” Hurst told WEAU-TV.

When he reached a person of authority at the DNR office, the lifelong hunter was told not only was it legal to kill the surviving buck using his archery permit, but for an extra $42.20, he could tag the second buck as well.

From that point, Hurst didn’t hesitate; though he admitted the shot was not the most difficult he’d ever taken with a bow. It was no telling how long the two had been hopelessly locked together by the antlers–and the surviving buck could barely stand, depleted by exhaustion.

“I kind of thought it was a mercy shot … a pretty easy shot,” he admitted later.

With the combined weight of the two entangled bucks exceeding 400 pounds, Hurst called a friend with a tow truck to hoist the adjoined animals into his pickup.

And yes, he plans to have the deer heads mounted for posterity, just as he found them on that November 2 afternoon.