Dumb Outdoor Criminal of the Week

Have you ever heard about someone who drove away in a stolen a police car and wondered how anyone could... 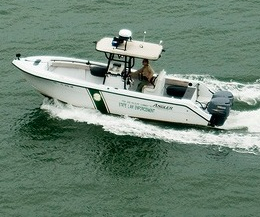 Have you ever heard about someone who drove away in a stolen a police car and wondered how anyone could possibly do anything more stupid? Well, faithful Newshound readers, we bring you that person.

Meet Michael Scott Noble, hometown unknown, who was apprehended Tuesday by U.S. Coast Guard authorities on the St. Johns River after he swiped a marked watercraft belonging to the Florida Fish and Wildlife law enforcement division from a marina dock.

Noble, 59, has been charged with grand theft, impersonating an officer and unlawful use of police badges or other indications of authority.

The wildlife agency’s dispatch in Orlando contacted the Coast Guard at 7:45 a.m. Oct. 26 and reported the theft of a 20-foot Boston Whaler from a marina at Fleming Island, about 15 miles southwest of Jacksonville.

Security cameras captured the boat near Hannah Park at Mayport at about 8:05 a.m. One person was seen on board at the time.

“The Coast Guard launched a 25-foot maritime law-enforcement crew from Station Mayport,” according to a USCG statement. “At 8:13 a.m. the Coast Guard interdicted the vessel in question and detained the suspect at 8:20 a.m.”

A word of caution to the cops: Don’t leave this guy alone in a police cruiser with the keys in the ignition.