Robert “Tres” Ammerman is officially the coolest male nurse in the world. What sets Ammerman high and above the other... 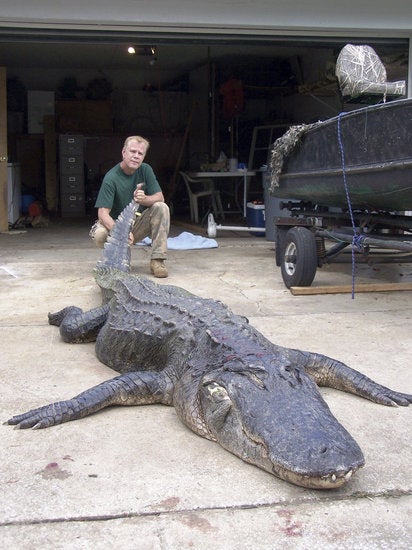 Robert “Tres” Ammerman is officially the coolest male nurse in the world.

What sets Ammerman high and above the other hardworking men in his profession, a profession unfairly ridiculed and all too often made to be the butt of mean spirited jokes? How about the fact that on Halloween night he took a 14-foot 3 ½ inch, 645-pound alligator in Florida? Yeah, I thought that’d shut you up.

For the past seven years Ammerman has participated in the Florida Fish and Wildlife Conservation Commission’s (FWC) annual statewide alligator harvest and has three life-size mounts of alligators measuring over 13 feet in length in his home to prove the type of success he’s had. But the alligator he and hunting partners Sam Whiteand and T.J. Schauf took from the Lake Washington area of the St. Johns River in Brevard County could be the alligator of a lifetime.

As Ammerman’s wife Janette observed, her husband’s “very unlikely to see something this big again.” Steve Stiegler of the FWC’s alligator management program disagrees. “I’m sure there’s an alligator out there that will break this one [record]. When and where it will happen is the only question.”

Ammerman harpooned the bull gator shortly after midnight from the relative safety of his 14-foot johnboat. The gator immediately took off, dragging the boat with him. “The line was spinning off my buoy,” he said. “He pulled us around the lake for about 45 minutes before we tried to work him up to the side of the boat.” Even after pulling a boat full of three men around for close to an hour failed to slow the swamp dragon down. When the hunters tried to pull him to the boat, “He death-rolled and knocked my boat around; it got pretty exciting.”

The men never got the alligator in the boat though and ultimately had to drag the beast to shore. While Ammerma’s catch broke the state record for length, set in 1997 by a 14 foot 5/8 inch gator, it failed to beat the record for the heaviest. That record, set in 1989, still stands at an astronomical 1,043 pounds.

So congratulations on your record Tres. And for how you’ve changed the public’s perception of male nurses. Now, if you can only help out those male flight attendants. They have an image problem as well.