More Than One Way to Kill a Buck

In a sobering reminder that not all trophy bucks are taken down by hard-working outdoorsmen, one Wisconsin woman has unintentionally... 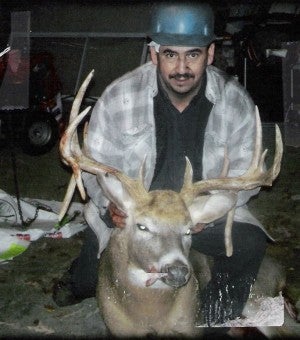 In a sobering reminder that not all trophy bucks are taken down by hard-working outdoorsmen, one Wisconsin woman has unintentionally killed more prize deer this season than most hunters–with her car.

Brenda Morga and two young passengers were driving along Highway 171 in Richland County, WI around 9:30 pm a few weeks ago, when she crashed into a huge droptine buck that was crossing the road in pursuit of four does. Afterwards, her niece said she had seen the deer in front of the car, but was afraid to scream because she knew they were going to hit it.

Morga’s Ford Mustang was totaled, but no one was injured–other than the buck which smashed into the front right side of the car, temporarily covered the windshield, flew over the top of the convertible and landed in the middle of the road behind the car.

A fellow motorist stayed with Morga on the dark country road for more than 90 minutes until her husband arrived with his pickup.

Morga, who is not a hunter, did not initially realize there was anything special about the deer. She knew someone would want the meat, so she called friends at a nearby bar to ask if they wanted to come pick up the deer, since it would not fit in her smashed convertible. Now, she recalls with a laugh that she offered to give it away, having received offers up to $10,000 for the trophy which she is considering selling.

The meat was given to a friend, and the head and rack were sent out of state for safe-keeping after she began receiving constant requests to see the deer.

Less than two weeks earlier while driving the same vehicle on the same highway, Morga also hit and killed an 8-point buck.

According to the Wisconsin Department of Transportation, there were more than 15,000 reported deer-vehicle collisions in the state last year, with almost half occurring during hunting season.

For the full story got to Madison.com.