Ben Bellows and Hugh George filed a class-action law suit against Newfoundland earlier this month because they think there are... 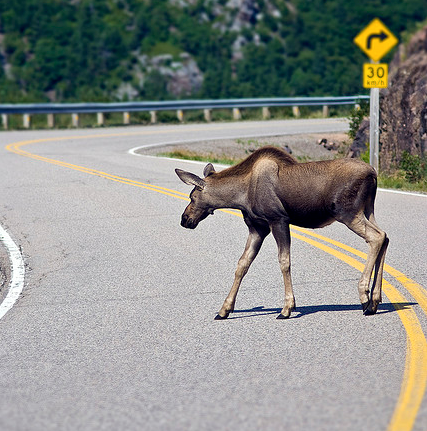 Ben Bellows and Hugh George filed a class-action law suit against Newfoundland earlier this month because they think there are too many moose in the province.

Both men were badly injured and are restricted to wheelchairs after crashing into moose in 2010. And the two men are not alone, about 40 people have signed on to the class-action suit which calls for financial assistance for the injured motorists and cutting moose-vehicle collisions in Newfoundland by 50 percent in five years. According to the BBC, there are about 700 moose-vehicle accidents in Newfoundland each year.

There are about 125,000 moose in Newfoundland, which means there is approximately 1 moose for every four Newfoundland residents.

“The government has decided to bury its head in the sand about moose-vehicle collisions, which have us all terrified,” lawyer Ches Crosbie told the Toronto Sun newspaper.

In a document filed by the plaintiffs, they stated that the accidents involving moose in Newfoundland are “no acts of God, but acts of government.”

The plaintiffs have not said how they expect the government to decrease moose-vehicle collsisions, but the responsibility could fall upon the backs of hunters. So far the Newfoundland government has not said much about the suit.

While it’s tragic that Bellows and George were severely injured, I question where the 50 percent figure came from. Neither man claims to be a fish and game biologist and I doubt their lawyer is either. Was the 50 percent number found through the use of science or just an arbitrary quota that they picked because it sounded reasonable? I suspect it is the latter, but only time will tell.