Right to Bear Arms and to Bare Everything

A heated conflict has arisen in a portion of rural and scenic Washington state that has the members of a... 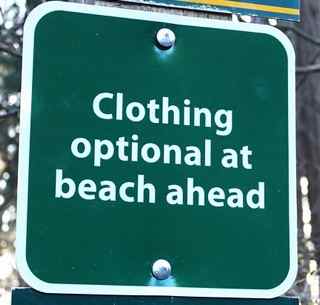 A heated conflict has arisen in a portion of rural and scenic Washington state that has the members of a “social camping club” going to court to block a county’s plans to build a public shooting range near its 320-acre encampment, lake and hiking area.

However, the members who lease the facilities located at Lake Bronson Club near Sultan aren’t your average, run-of-the-mill outdoor enthusiasts. That’s because they prefer to do their out-of-doors recreation au naturale–or, totally in the buff.

Yes, Lake Bronson Associates, a registered corporation in Washington state since the 1940s, is the parent company of a commercial nudist camp, with a website that claims it attracts sun worshippers from around the world to its 7.5-acre spring-fed lake, 85-foot waterfall and miles of hiking trails.

According to the Everett Herald, a lawsuit filed by the nudist club and other plaintiffs contends that the parcel of forestland where Snohomish County intends to build a public shooting range was improperly transferred to the county from the state. The suit also contends such transferred lands must be utilized only for public parks in accordance with state and county outdoor recreation plans.

However, it’s pretty clear to local shooting enthusiasts and county officials alike that the nudists have their panties in a bunch (metaphorically speaking, of course) merely from the prospect of having a shooting range and regular firearms training area built within earshot of where they freely frolic.

“We’re thinking it’s not a good idea to have a shooting range a mile away from a social camping club,” Jodi Halfhill, secretary for Lake Bronson Club, told the Everett newspaper. “After discussion, the board of directors just felt it was in our best interest to (file suit.)”

But developers and county officials say they are moving forward with plans to make this scenic area north of Seattle into a popular attraction for shooters, rock climbers and other outdoor recreationists–the type who enjoy nature while remaining fully clothed.