Humans, in their never-ending quest to control different facets of the natural world, have given us such environmental delights as... 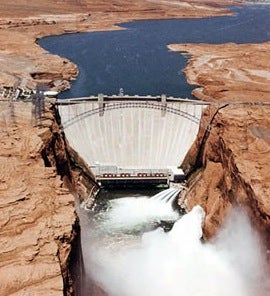 Humans, in their never-ending quest to control different facets of the natural world, have given us such environmental delights as the Asian grass carp, kudzu, northern snakehead and nutria, just to name a few.

A few years ago, biologists and aquatic specialists determined that the existence of the Glen Canyon Dam, built on the Colorado River in the early 1960s, was the inherent cause of unnatural river flows though the Grand Canyon. Because the river was now prevented from flooding and periodically roaring through the canyon as it would without the dam, wise ecologists reasoned that it had a detrimental impact on the environment–and the fishery.

So, beginning in 1996, the Bureau of Reclamation began an experimental project aimed at restoring the Colorado River through the Grand Canyon to a more-natural condition, by releasing large amounts of water from the Glen Canyon Dam to simulate flooding that occurs seasonally during the spring snowmelt. The main objective for the artificial flooding was to create sandbars for camping sites, protect archaeological resources and provide critical habitat for plants and animals, including a federally protected minnow called the humpback chub.

So, with three high-flow experiments (HFEs) currently in the books, how are things working out?

On the downside, the report notes that the flooding has resulted in an eightfold increase in the number of non-native rainbow trout, a species that delights in scarfing down the native chub minnows.

So now the federal agency says it will use electroshocking to remove thousands of trout in an effort to protect the remaining endangered minnows. Additionally, the feds say they will take steps to improve the monitoring of future releases to help reduce the number of trout traveling downstream.

“If these high-flow experiments are continued, careful monitoring is needed to resolve the uncertainty about the timing and the rainbow trout response that results,” said Ted Melis, deputy chief of the U.S. Geological Survey’s Grand Canyon Research and Monitoring Center in Flagstaff, AZ.

There was no mention in this week’s report of how much all this is costing the U.S. taxpayer. It is estimated to amount to millions of dollars and may take the better part of a decade to complete.