A million years ago, a bear that weighed more than a mid-size truck roamed around South America battling saber tooth... 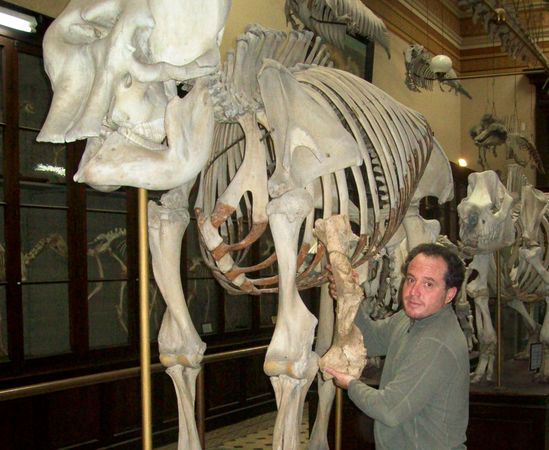 A million years ago, a bear that weighed more than a mid-size truck roamed around South America battling saber tooth cats and eating sloths.

Scientists recently estimated that a specimen of the South American short-faced bear could have weighed as much as 3,500 pounds, making it the largest bear in existence.

Let’s think about that for a minute: 3,500 pounds. That’s the size of a Buick Lesabre, only a few hundred pounds shy of an F-150. That’s twice the size of the largest Kodiak bear on record.

That bear weighed as much I would if I were with 22 more of me. I had college classes that probably weighed less than that bear.

The previous pre-historic record-holder was the North American short-faced bear, but it was likely at least 1,000 pounds lighter. It’s North American cousin was thought to perhaps prey on animals as large as camels and mammoths.

Studies have suggested that the bear evolved to a larger size because of an absence of other predators.

Scientists are less sure about the diet and behavior of it’s South American cousin, but if a 2,500-pound bear is eating camels, I can’t help but wonder what a bear a thousand pounds heavier might attack, although sloths were likely a staple in its diet.

Scientists recently re-examined the humerus of the South American short-faced bear skeleton found in 1935 to determine the that the 11-foot bear likely weighed 3,500 pounds, according to an article on the National Geographic website. It roamed the earth between 500,000 and 2,000,000 years ago.

Co-author of the resulting study published in the journal of Paleontology, Leopold Soibelzon, said:

“During its time, this bear was the largest and most powerful land predator in the world, so we think it lived free of fear of being eaten.”

The biggest bear in modern times is a 2,200-pound polar bear shot in Alaska in the 19th century. That bear was more than 12 feet tall.

Perhaps Blaine Schubert, another co-author of the study, summarized the analysis best, if not the most scientifically.

“It just blew my mind how big it was.”

If you had the chance to hunt a South American short-faced bear with your choice of gun today, what would you bring?