You know the fishing is good when the big ones are literally jumping into boats. Yesterday, Gayne Young brought you... 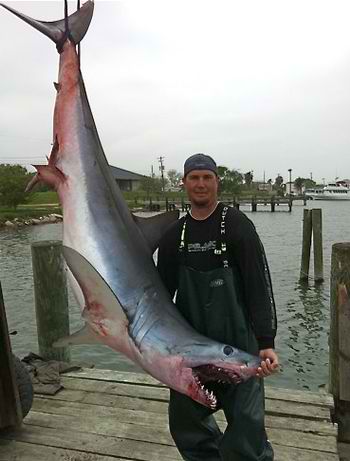 You know the fishing is good when the big ones are literally jumping into boats.

Yesterday, Gayne Young brought you the tale of a Florida tourist who was body-slammed by an airborne spotted eagle ray, but that wasn’t the only case of high-flying fish.

Early Monday morning, boat captain Jason Kresse and his two other fishermen out of Freeport, TX got more than they bargained for when an 8-foot, 375-pound mako shark launched itself out of the Gulf of Mexico and onto the deck of their 25-foot craft.

The three commercial fishermen had already hauled some 2,400 pounds of red snapper from the Gulf depths–and had just dumped two large buckets of snapper guts overboard–when the incident occurred at about 3:30 a.m.

“I looked up and 15 feet up in the air is a big-old shark,” Kresse said. “It ended up landing in the back of my boat.”

As the decked shark thrashed around, there was no possibility for the crew to safely return it to the water. It eventually died as the boat was returning to port.

Because he didn’t possess a shark permit, Kresse (shown here in his submitted photo) contacted the Texas Parks and Wildlife Department about his accidental catch. He was informed he would not violate any fishing regulations because of the unusual circumstances.

In an interview Wednesday morning, Kresse called the incident “crazy” and described the ensuing media frenzy in the aftermath of his catch as “unreal.”

The chum-loving shark is on display at Captain Mark’s Seafood, in Freeport, which Kresse manages.