Over the weekend, police in a central Ohio town cited the driver and passengers of a vehicle for allegedly using... 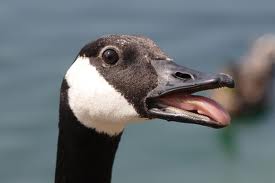 Over the weekend, police in a central Ohio town cited the driver and passengers of a vehicle for allegedly using a fishing net to capture a city park goose and driving off with it.

Two of Chillicothe’s finest reportedly stopped the trio on North High Street after they took a gander through the vehicle’s rear window and spotted a full-grown Canada goose standing in the rear cargo area.

According to the Chillicothe Gazette, when the cops approached the car, the driver explained that the goose was from one of the suspect’s homes and they were just taking it for a ride, because geese–just like Labrador retrievers–really enjoy going for car rides.

One of the suspects gave the officers another explanation: they found the goose and it was so dirty they decided–as conscientious stewards of nature and the environment–to take it home to clean it.

But the seasoned and wise law enforcement veterans weren’t buying it.

The driver finally broke down and admitted they found the goose at the city’s Yoctangee Park, plied it with food, then captured it with a fishing net. Witnesses of the feathered heist later corroborated the driver’s admission, saying they saw the two passengers catch the goose.

Court dates were set for the trio and the goose was returned to the park “without incident,” according to the police report.

The intentions of the three goose-grabbers–whether culinary or merely jocular–were never made clear to the investigating officers.

As to whose goose ends up being cooked, it will be up to the Chillicothe municipal judge to decide.